AMIDST THE THUNDERING, RUMBLING AND TREMORS – GUYANA REPORT 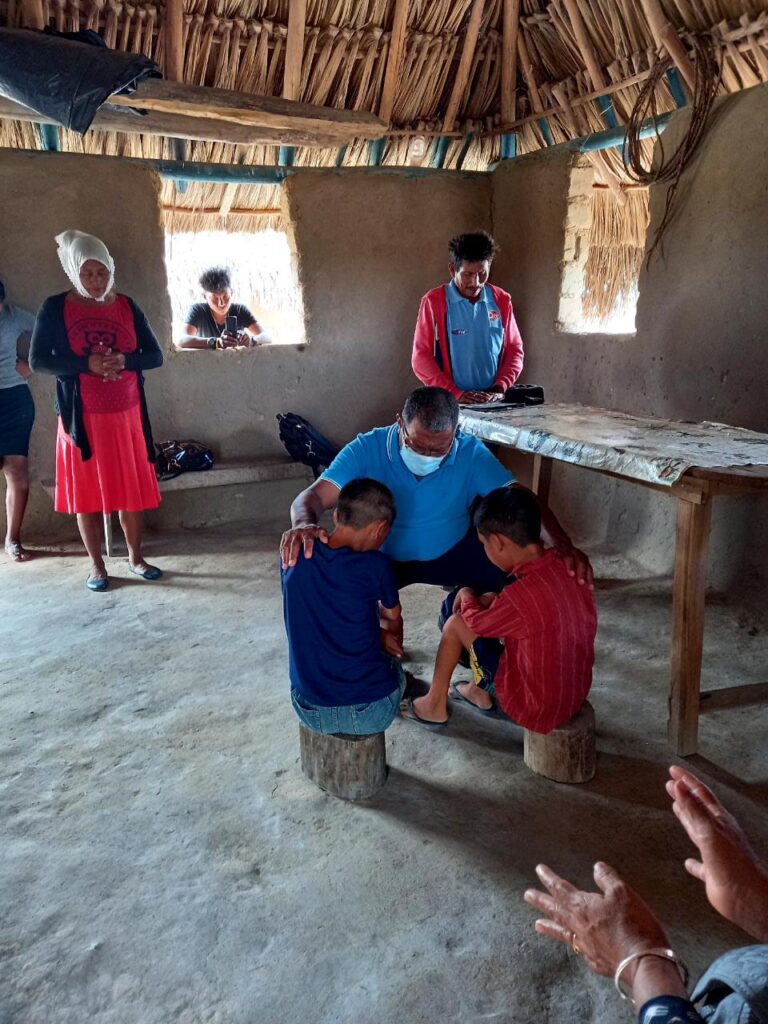 This is a brief report on the recent trip to the areas affected by the earthquake in southern part of Guyana- namely- Katoonarib and Sawariwau villages.

At about 3.02 pm on 7 February the earthquake took place 70 miles from where we live. Ever since the quake, I was burdened to go to minister the gospel, but first I had to go up on the mountains in South Pakariamas.

On 16 February, five of us left on a four days ministry trip to the areas affected by quake among the Wapishanas. The enemy was angry and tried to hinder us. When we were about to leave the vehicle was not available, and quickly the Lord inspired me to hire another vehicle – this was an act of faith. We traveled for three hours and the vehicle axle broke. This was another effort of the enemy to hinder and delay the journey. However, I hired another vehicle to complete the journey and we arrived just a few minutes before the start of service at 7.00 pm.

That evening ten persons responded to the gospel, and next morning at 6.00 a.m we assembled for morning devotion. During that day we went to another part of the same village. The population is much greater there, after we preached that evening 3 persons responded.

Both of the nights we spent in that village the earth thundering, rumbling and tremors continued. The following morning, on 18 February,we visited the areas which were directly hit by the earthquake, and we sawmiles long cracks, which according to the residents are widening each day. We saw holes and swamps dried and mounds raised in place of the swamps.

By 2.00 p.m we left for another village named Sawariwau 15 miles away from Katoonarib, where more than 500 people live. This village is strictly a Catholic area and no one is permitted to enter to preach the gospel, and being evangelists we had difficulties to obtain permission from the village council. However, the Lord intervened on our behalf, the “Toshao” or village leader give us the permission against all odds.

I knew that God was moving. We started service at 6.00 p.m and over 80 persons attended and listened attentively as I presented the gospel. When the challenge was made to turn from their wicked ways quoting 2 Chronicles 7:14 as the closing challenge, to God be the glory, over 40 persons responded with tears.

on 19 February we were invited by many to visit their homes, so we were occupied all day. Every home visited responded to the Gospel. We prayed for the sick, crippled and troubled souls and we also distributed food hampers. There we met two crippled brothers, aged 10 and 12. They did not have wheelchair, and God put it on my heart to pray for the provision for both of them.

During one of the visits, while witnessing to an elderly man, suddenly we heard a loud rumbling and thundering and the ground began to tremble and the ground under my feet became like a soft sponge rising up and down for some seconds. I looked down, and under my feet there was a crack. Wow it was scary! Having shared the gospel the man prayed to receive Christ. Hallelujah! Our Mighty God was moving hearts.

The final service saw over 300 persons attending and over 50 persons responded to the gospel, including the headmaster of the school, who publicly confessed the adultery and in prayer received Christ as Savior and Lord. Truly the fire of God was set ablaze and the souls of men melted before Almighty God.

The village leader and many villagers requested that we return soon to teach them the pure Word of God, for they said that they had never heard such preaching of the Word of God. By midnight we went to the next village and by morning many more came to hear the Word of God and also responded to the gospel. Before we leave I baptized 5 persons who happily went away rejoicing.

By mid March I will be going to four other locations in the north for two weeks of ministry, then at the end of April back on the mountains for a week of ministry. God willing the new church building will be ready for dedication by then.

A lot of work which needs prayers, support and workers.

Continue to pray for the young believers who need to be nurtured and discipled and that many respond to God’s call to go and follow Him, for the field is ripe for harvest, but the laborers are FEW.

Yours in the regions beyond.