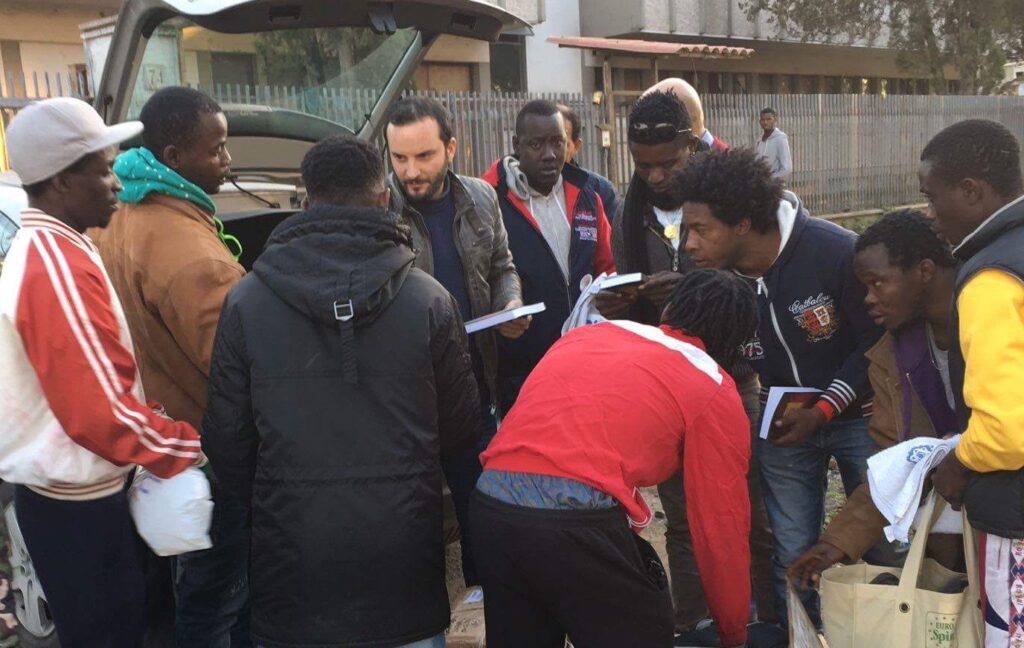 “Because I was a stranger and you welcomed me”

The words of Jesus to his disciples in Matthew 25 immediately raise questions in the form of: “When Lord? When, Lord? When did we see you as a stranger and welcome you?”

Jesus was a foreigner, specifically a refugee in Egypt, in his early years. His parents fled to save him from the massacre of the Hebrew first-born sons ordered by Herod’s decree. But in these words in Matthew Jesus was not referring to that period, what Jesus was revealing was his total identification with the stranger, to the point that to welcome one in His name is to welcome Himself.

Throughout Scripture the theme of welcoming the stranger recurs continually. Almost all the authors of Scripture have been strangers in a foreign land, as fugitives, exiles, refugees, and displaced persons. And God gives to Israel, His people chosen as His witnesses, precise orders to welcome and integrate the foreigner (Lev. 19:10, 33-34). Even the Apostle Peter addresses his first letter to the “scattered strangers” in the regions of Asia.

In a spiritual sense, every believer must consider themselves as “strangers and pilgrims” on this earth, yet also as a fellow citizen of heaven. Having become God’s people, we are now “strangers and pilgrims” in relation to the world (1 Peter 2:11), but “fellow citizens of the saints and members of the family of God” (Ephesians 2:11,19). We are therefore exhorted to “welcome one another, just as Christ also received us for the glory of God” (Romans 14:7). Therefore every Christian should be able to identify with the situation of the stranger, having been welcomed by Christ, to also be the one who welcomes.

The invitation to welcome the stranger today is more relevant than ever.

Never in history has there been such a large number of foreign refugees scattered throughout the world. According to the latest figures (2020) of the UNHCR (the United Nations Refugee Agency), there are currently around 79.5 million refugees in the world. Out of these 40% are minors, about 2.1 million have found refuge in Europe, and about 137,000 in Italy alone.

As believers, we must intervene both for Christian and humanitarian reasons. The provision of help may come through personal initiative, but better yet as initiatives of the local church or by Christian networks and mission associations located or working in the territory.

The ministry that I and my wife are involved in, in Italy, is directed specifically toward refugees, displaced persons, persecuted Christians, those who were constrained to leave their homes (forcibly displaced people), migrants, and foreign university students.

As servants in Italy, in collaboration with other mission organisations we have taken this challenge seriously, seeing it as a huge opportunity that is only given to us for a time. Just think how many years of preparation it would take before a believer could evangelise someone who lives in a nation that is part of the so-called “10/40 window” where most of the unreached are at present. Those unreached nations are largely the same as the countries from which the refugees flee every year to “our home”. Countries like Iran, Pakistan, Afghanistan, Somalia, and Syria.

In order to welcome and therefore present the Gospel to the foreigners arriving in Italy, we have offered churches training courses for believers who want to be involved in this ministry. We have organised youth conferences, lectures, and workshops to equip other believers to use specific tools for evangelism. There is evangelistic material (audiovisuals, Bibles, Gospels and pamphlets in their mother tongue, DVD movies, micro sd, discipleship courses, etc.) available in numerous languages and dialects for evangelisation. We have networked with local Christian organisations, who have made available their own tools, spaces, resources, biblical and educational training. Various programmes are offered: language and computer courses, after-school care for foreign children, Christian culture courses, job placement, and support for family reunification. In cases of extreme poverty it has been crucial to constantly provide basic necessities such as clothes, blankets, and food. Good works motivated by a living faith and unconditional love for one’s neighbour are the key to lead the heart of the stranger to Christ.

The Lord has given us the joy and the privilege of seeing so many foreigners listen to His word, believe in Christ’s sacrifice and forgiveness, and then testify to their faith through baptism. Among the thousands of refugees living in our nation, some are asylum seekers for reasons of their faith. Many are our brothers and sisters, who fled to avoid death or imprisonment. They flee to “Christian” Europe, hoping to find other brothers and sisters in the faith, and a church that will be a place of care, refreshment, and refuge for them. It is sad to know that some of them remain deeply disappointed.

I have repeatedly encountered strong resistance in some churches. Many resist welcoming the stranger, even if not explicitly expressed. Some because of mistrust, others because they feel unprepared, others still because they are convinced by the political slogans and media influence that has been allowed to prevail over the command of Matthew 28, to make disciples of all nations. A great challenge for us today is to bring back a biblical understanding of mission and to have a vision of the Kingdom of God that is not limited to our own local world, but is instead inclusive and global.

Here is the testimony of M.H., (Iranian refugee, in Italy for 4 years):
“I was the head of a small company with 8 people under me. I had everything, a very big house, cars, and all the means of work. I lived with my wife and 2 daughters. One of my employees was a hidden Christian. He introduced me to the gospel. I became a Christian in secret. Then I told another of my employees about the Bible. He denounced me. I had to run away right away. I lost everything. They took everything from me. I’ve been in Italy for four years in a refuge centre. There are 80 other people, all Muslims, only myself and two others are Christians. My wife stayed in Iran and was forced to marry a Muslim again to prove to the police that she is not my accomplice. A daughter of mine got married 2 years ago and had a baby. I could not be present at her wedding and I would like to see my little grandchild. Now I live on 3 euros a day, given to me by my host centre, with which I buy my food because the food they give us often makes me sick. The evangelical church is my family now, the brothers and sisters are my family. I have lost everything, but Christ gave his blood for me, nothing I suffer can repay what he has done for me.”

As servants of the Lord we want to support welcoming churches, in order to help them to take care of these brothers and sisters of ours and to be ready to receive other foreigners whom the Lord wants to save. I like to think that to the believers in the church who has welcomed M.H., the Lord Jesus himself will say: “I was a stranger and you welcomed me. Enter into my joy.”